Second edition published in May 2018
Available at Amazon.in 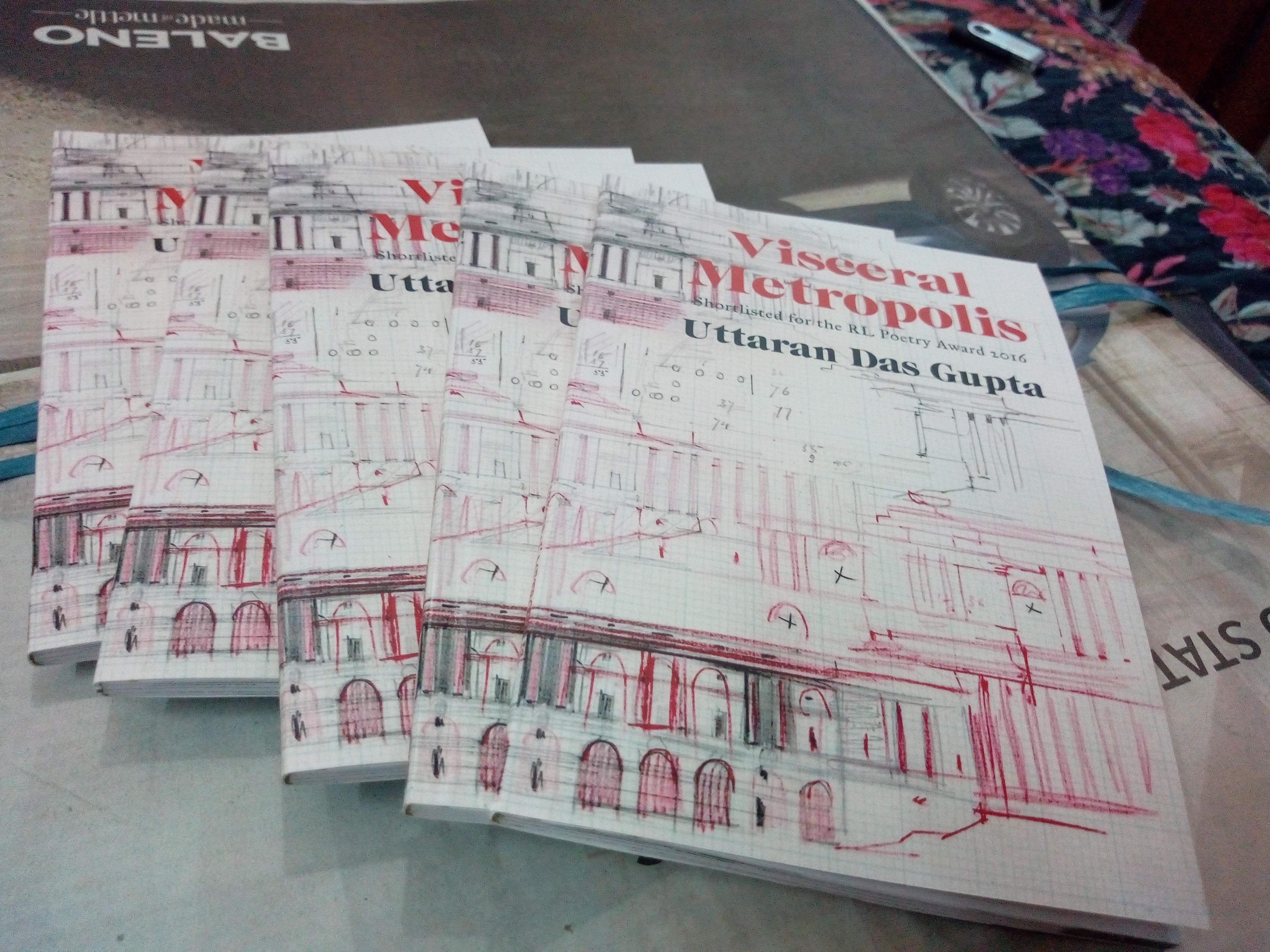 When this book is published and you read it
your morality will be outraged and
you will say: ‘… … I always
knew he was a little weird but I didn’t
know he was such a pervert. When did he
write all this? How did he find the time?’

Visceral Metropolis grapples boldly with its three central subjects: the big city as crucible, sewer, testing ground and festive parade of illusions; the individual self that is alternately ambushed and replenished by the big city, and must craft itself as it goes; and poetry itself, as passion, elusive illumination, pleasure, redemption.
Ranjit Hoskote

There is in these lines a coruscating rage and desperation that the formal rigour, the meter, the rhyme, can scarcely contain, though there will be moments of love and tenderness, a glint of humour, a comforting memory…
Rahul Soni

Kiriti Sengupta n Huffpost:
Let me talk about Visceral Metropolis now: The book starts with an incisive foreword by Philip Nikolayev. He rightly propounds: “One of [Das Gupta’s] assets is an ability to rhyme and metricise naturally and unobtrusively, harnessing the way we talk at moments of heightened emotion, all that while pulling off a conversational precision, down to semicolons in dialogue.” In the preface to the collection Das Gupta writes a long poem titled “Obstinacy,” a soliloquy, where he asks: “…You think you know me?/ You’ve no fucking idea how lucid/ and dangerous I can be. You see me/ doggedly hammering away at the/ keyboard, typing out a, 1,000-page un-/ readable document without missing/ a single punctuation but you don’t/ know that in my bedside drawer is a/ manuscript of un-publishable poetry,/ written out in a careful hand with green/ ink on yellow paper.// Do you know how long it has taken me to type out these poems?” Das Gupta’s confidence and his take on poetry strike at the outset, as he writes: “I’m more obstinate than the/ underground train/ tunneling its way through the rocky ab-/ -domen of the city. I’ve been hammering away so long at/ it, sweating blood like a slave at a/ pyramid-construction site, that I don’t/ even have to try anymore: every/ word I touch metamorphoses into// poetry.”

Read the complete story, Exploring Das Gupta and his Visceral Metropolis, in Huffpost.

Maaz Bin Bilal in The Hindu BussinessLine/BLink:
Uttaran Das Gupta’s verse is conversational and deals with the everyday of urban Indian landscapes and the hopes and thoughts of their citizens with an insight and a formalistic command that are rare. He writes in unobtrusive rhymes, in simple yet masterful patterns, at a time when free verse is a fad. The effect is remarkable, especially when the reader realises to her surprise that the flowing dialogues, often of lovers, are in fact written in rhyming verse, even as they carry the ease of a convivial evening spent with one’s (somewhat learned) partner in a Delhi barsati. For Das Gupta’s poems are most often about Delhi, his Visceral Metropolis; at other times, they can be about Kolkata. Always, they retain the same vivid imagery, the same easy tone.

Read the complete review, A city of awry angles, in The Hindu Business Line.

Jhilmil Breckenridge in The Citizen:
The book is peppered by black and white photographs, mostly of Delhi, that make you stop and ponder, as poetry should do. There is a sense of time slowing down, of wondering about our regal (?) past amidst the decaying city.

Das Gupta often uses whimsical, unusual images, but does not leave the reader wondering; he makes his point, often, succinctly, and in no uncertain words: “Dusk comes too early;/ darkness obliterates out ruins… nearly.” And so through this haunting elegy mostly for a Delhi crumbling, falling into a man made destruction, there is a sense of hope. And love, always love.

Read the complete review, A Dregs of a City: An Elegy. 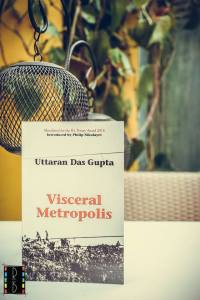 Amrita Ajay in Coldnoon:
Visceral Metropolis is deceptively titled: it inhabits states that are often beyond the visceral and often encompass so much more than the metropolis. The 32 poems in the volume resist any poetic dogmas, and are remarkable for the rare sincerity and emotional honesty. The poems have a dual preoccupation with love and psychogeography, and allied networks that shape the poet’s experiences. It is not simply the mapping of a metropolis, but its connection to other spaces – real, imagined and virtual – that give anchorage to this book. The poet meanders through Delhi, Kolkata, Shillong, Darjeeling, McLeodganj, Kashi, and even Bangladesh, through a simultaneity of belonging. It is to be noticed that a synaesthetic poem about Lenin Sarani in Kolkata and one addressed to a virtual Shillong seen on Facebook are penned in New Delhi. Space becomes a metonym for love, history, literature, alienation and much more in Das Gupta’s poetry.

A word also about the book construction and design: compact and aesthetically pleasing, i write imprint’s sleek publications are delightful. I read the book several times – at home, at work, and most of all in transit – all the while feeling the photographs of flyovers, architectural ruins and the garbage dump at Azadpur taking on a visual atmosphere complementary to the poems. The book’s division into sections of increasing numbers of poems and the symmetry of the first and last poems lends a well-conceived structural balance. The few typographical errors that appear are no hindrance to reading – if anything, human errors lend charm to daily arts.

Read the complete review, Inhabiting the Language of Love and the City. 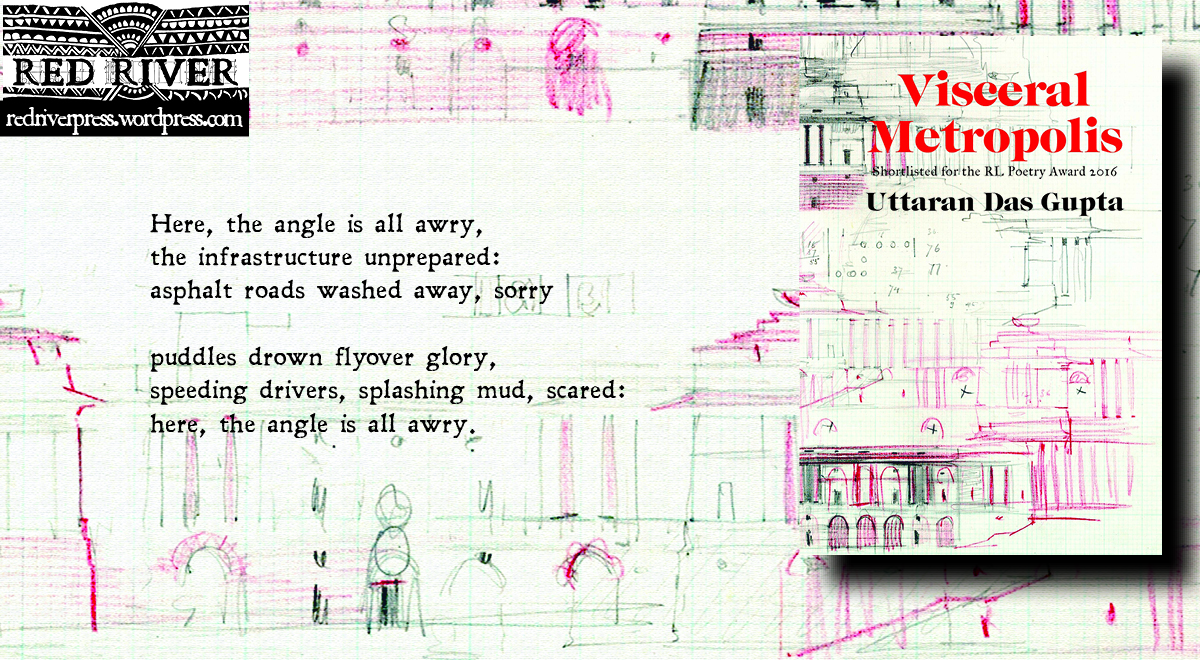