I compare poetry to my soul:
the way my soul illuminates my life,
poetry brings forth in the midst of sadness some blazing news
which happily I shelter in my blood
and for a long while I wait for a war
Poetry builds inside my chest a heart every day
for this war
my heart grows courageous like fire

This book brings together the best of legendary Assamese poet Sananta Tanty’s poems for the first time in English translation. The collection traverses his literary journey from his ground-breaking debut in 1981 to his latest poems. These poems narrate the history of post-Independence Assam, seen from the margins by an audacious poet. But one who deftly makes the concerns of the marginalised universal, turns personal into political, and sublimates interpersonal love into patriotism. As poet Kamalakar Bhat argues, ‘Here is a poet who has the courage to be rooted in his personal perspective; yet, by the sheer force of the generality of his feelings, achieves a universality that elevates his poems and make them resonate with our everyday anxieties.’ Says Tanty: ‘All our lives all of us have just written one poem, the poem of humanity – in this huge epic being written from time immemorial, I have also added a few lines.’ This book is an excerpt from that epic, the history of a man revealing within itself history of a people.

Dealing with themes like corruption in public life, unemployment, poverty, hunger and frustrations, among others, Tanty’s poetry is full of anger and protest. Coming from a linguistic and cultural background different from the so-called ‘mainstream’ Assamese poetry, Tanty, with his unadulterated voice, make the readers turn their heads to listen to him carefully with a force that draws urgent attention.
BIPULJYOTI SAIKIA

Tanty’s poems have a force that drew attention to deeper issues often forgotten in the street fighting protests of Assam. As an emerging voice in the seventies from the tea gardens, Tanty influenced a generation of poets with his searing statement of society, life and love.
KISHALAY BHATTACHARJEE

Tanty’s poems on revolution, defiance, love and collective nostalgia in Sarma’s immaculate translation are equally about the romance of struggle and the power and mutability of poetry. The politics of naming and the owning or politicisation of common spaces is a constant refrain through these poems. Even his love poems have a revolutionary zeal.
SHALIM M HUSSAIN

In a poem like ‘Whenever I protest, they call me a terrorist’, ground reality bumps into popular rhetoric. There is something happening in the Northeast, something outside our La La Land of fairy tales, something that continues to resist the omnipotence of the Indian state. And those whispers are found in these poems.
RAMU RAMANATHAN

Tanty is a poet of strong convictions, strong lyrical voice, strong personal commitment, and strong aesthetic attitude. He is a poet who insistently seems to use the medium of poetry as a comprehensive tool for all forms of articulation. Poetry for Tanty, it would appear, is language itself, which facilitates human articulation.
KAMALAKAR BHAT

Tanty has never shied away from the fact that he is from the tea garden community. Yet, this is not central to this identity. Despite acute political awareness, Tanty’s poetry is a constant struggle to go beyond the confines of labels, of identity markers, of caste, creed, religion – to be essentially human.
KAMAL KUMAR TANTI

The rebel in Tanty is inherent and eternal. The subject of his poetry is not the subjective modernist poet aloof from the people on the street. It gradually expands from a tea garden community to the Assamese identity and to the universe. The rebel does not celebrate hatred or enmity, but puts love at its core. The anxiety for the social and political condition does not make the poet distressed, instead he announces the subject as a mode of immense festivity of the people: I’m the luminous festival of man.
SAMUDRA KAJAL SAIKIA

NABINA DAS in Scroll.in:
What Tanty has written is perhaps more pertinent today, given the current political environment. The Kashmir impasse, trouble in the North-East, low-intensity but recurrent conflicts in the so-called backwaters of northern and central India, as well as the urban angst where rifts between religions, upper and oppressed castes, migrant communities and the upwardly mobile are more visible, all offer a foreboding picture of what he said:

I will rebel inside your core, start a revolution
If you rule us at gunpoint forever.
The sky will be the colour of smoke; it will rain blood.
The city will be riotous. People will be oceans. 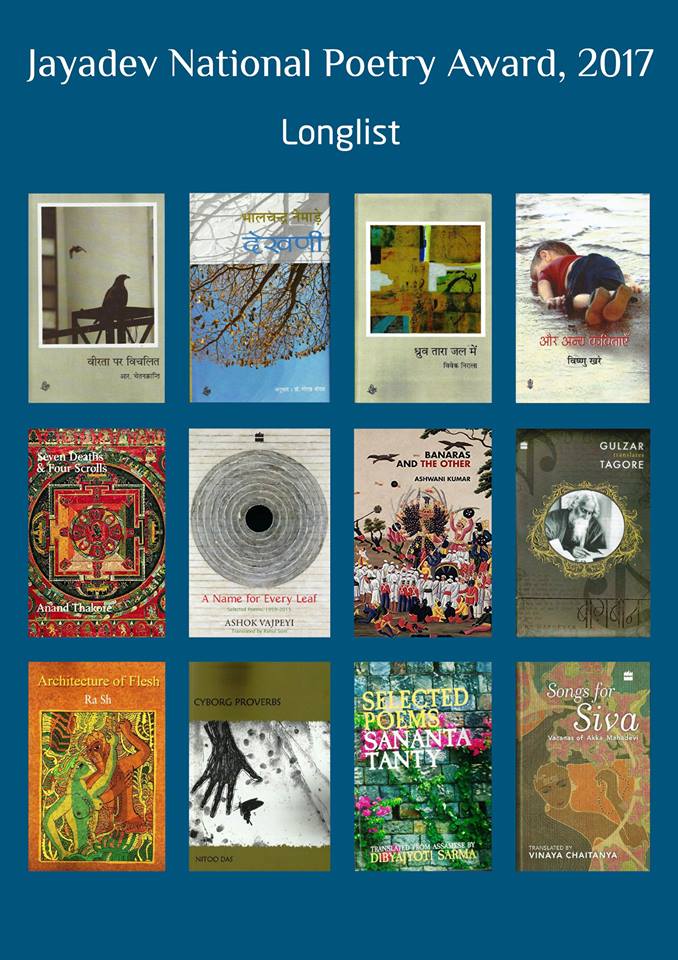 The Sananta Tanty translations in the longlist of Jayadev National Poetry Award 2017. 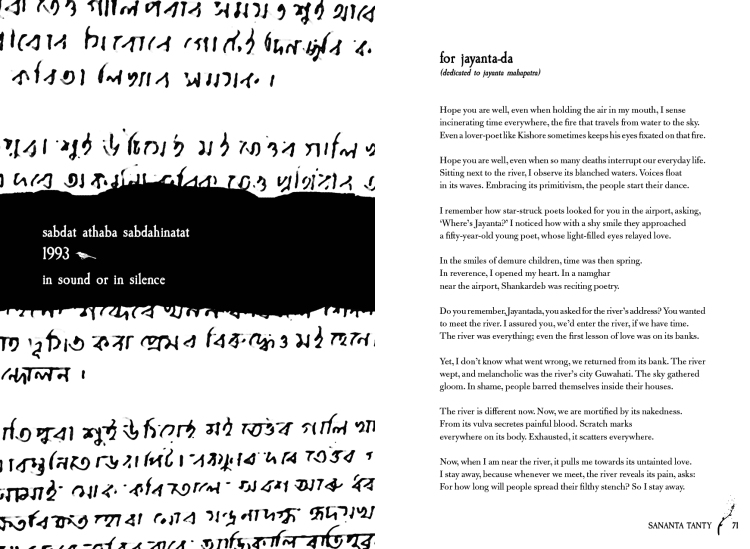 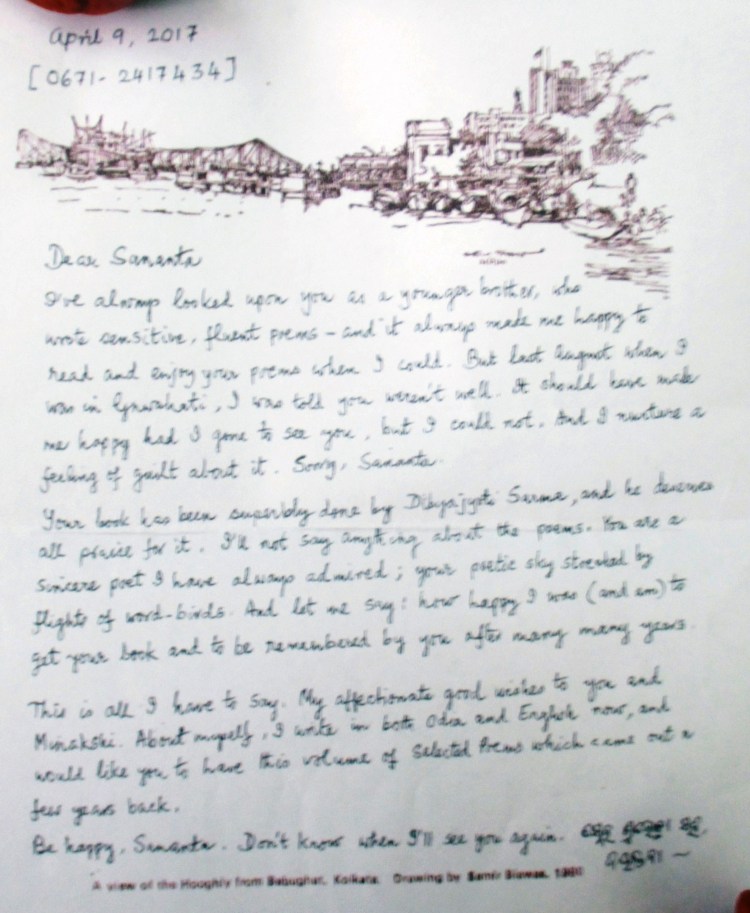 A letter from Jayanta Mahapatra after receiving a copy of Selected Poems Sananta Tanty. 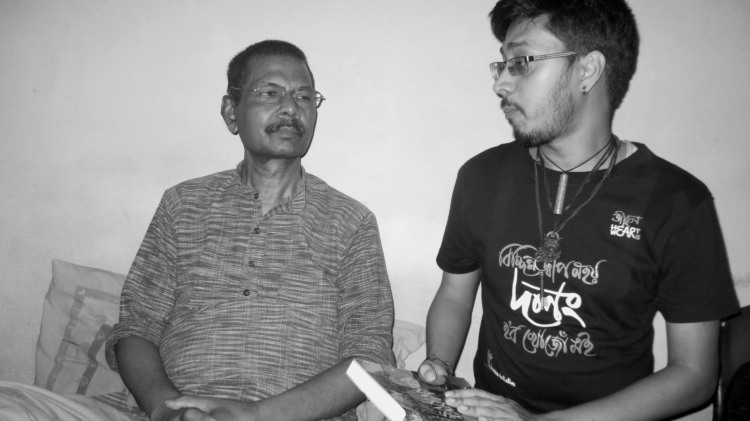 The poet and the translator.