Amit Ranjan has made a major contribution to Australia-India relations, having been awarded the honourable position of Australia Awards Ambassador in India, as well as Alumni Excellence Award. His doctoral research on John Lang, a 19th century Australian writer, lawyer and journalist has been internationally acclaimed, and will come out as a book next year.

The present collection is wide ranging and displays fearlessness in confronting issues that affect us all. It does not retreat behind the façade of the merely lyrical, but weaves together everyday events, with folk traditions of the subcontinent, with a keenly felt desire to capture the most subtle of passing feelings, which is of course poetry’s vocation: the invention of new forms of subjectivity, so that the reader can, in turn, interrogate him or herself and ask: ‘Can I too be like that?’ or ‘Is that a way of responding to this unheard-of event?’

In a true Aristotelean tradition, this collection both informs and pleases. This Greek idea of the function of poetry probably has, like so much else in the tradition they call Western, its Sanskrit equivalent, but the lesson is universal. Amit, accordingly, rewards the reader’s continued attention with humour as he makes us think again about our place in this difficult and complicated world. The artful politics involved in weaving these poetic elements through these texts is the consummate skill of this poet who sings, like his eponymous muse, the late great Leonard Cohen.

The poems in Amit Ranjan’s collection are as intriguing as the title. With deep insight and ironic humour, the poet goes on a lyrical hunt for the crucial ‘me’ in all the facets of the human existence and dilemma. Love, heartbreak, fear, laughter, environment, social milieu and its pitfalls; all come under the purview of his quest for the human self. Ranjan has a refined poetic sensibility. He is not averse to word-play or deconstructing syntax. To his credit, he does it without disturbing any constituent of the intrinsic lyricism of the poem. The result is both pleasing and provocative for the reader, spurring her to read on. What more could one want from a collection of poems?
Mridula Garg, Recipient of the Sahitya Akademi Award and the author of popular novels Miljul Mann and Chittkobra in Hindi and The Last Email in English

This is a breathtaking, stunning, almost Cohenesque debut collection of poetry. This is a collection that does Leonard Cohen, the poet’s muse, proud as it does all Cohen fans. Amit Ranjan plays no games (even if he insists that we look at the world in terms of Name, Place, Animal, and Thing, in the reverse order, preceded by Remembering) in this remarkable collection that shows his mastery of form and his vision of the quotidian. Read him, for he gives you your man, Amit Ranjan.
GJV Prasad, renowned poet and critic, author of In Delhi Without a Visa

Amit Ranjan writes mostly in rhyme. His lines long for rhyme, as if that alone were the home of poetry. There is a restlessness in the lines that have managed to rhyme, but not without effort – I like those lines, their unpolishedness, because they reveal an impulse that sophistication often erases. ‘When you said this is the last time/ and i gave you my last rhyme.’ This is a collection in the truest sense of the term – poems, poem-like expressions, thoughts collected for nearly two decades of Amit Ranjan’s young life. In that sense, they also give us a map of the poet’s growth – there is skin in the lines, the calluses and scars and torn skin are all here, and therein their charm. You read these poems also to see how thoughts form like clouds, even if they do not always bring rain. ‘Bearded Man in the Attic’, for instance, is a limerick-like poem that Amit Ranjan wrote in 2002. It’s amusing to see ‘attic’ being made to rhyme with ‘romantic’, and to hear what is left unsaid, the echo of ‘the mad woman in the attic’ that marks the title and the tone of the poem. I read these poems as studies in poetrifying, a wonderful record of the journey of poetry and the journey of a poet. It is perhaps the reason why the ‘incubator’ and the ‘incubus’ are such potent metaphors in his poetry. As are the amoeba and the shifting cellular membranes of the self. We see things growing, evolving, agitating, all signs of life. To read these poems is to experience the humour, and sometimes the tragicomedy, of being in process. The poet’s desire is explicit: ‘A xself longs to find itself/ On this shelf’. These are poems about the ‘xself’, and x+n selves.
Sumana Roy, author of How I Became a Tree & Missing

Amit Ranjan is a wonderer and a wanderer, and a curious cat lured by cemeteries and symmetries. His poems and short stories have been published in various journals like La Zaporogue, Anti Serious, Coldnoon, Muse India, The Equator Line, Daily O, The Hindu, Apollonian, etc, and he has also essayed the role of Chit, a baby elephant, in his own play titled The True Story of Fooko, Shoe Kriya and Fooko, in Just Three Acts, Mind the Commas Please.

His research about John Lang, the lawyer of Rani of Jhansi, has received wide acclaim and it is going to be published soon as a book. Two other books are also forthcoming next year – a non-fiction work on Dara Shikoh; and an English translation of Mridula Garg’s Sahitya Akademi Award winning novel in Hindi Miljul Mann. He’s also been a recipient of fellowships like the Endeavour, Inlaks, and the Fulbright.

Find Me Leonard Cohen, I’m Almost Thirty is his debut collection of poems. 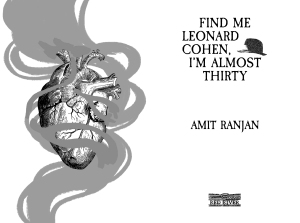 Find the book at Amazon.com.

Shelly Bhoil in The Wire
Ranjan’s poems are layered with the possibility of infinite identities (as against the contemporary ideological pitfall of identity labelling with either an anti-this/that or a trans-everything), reinforced by the recurrent image of the hat in the book. The poems, however, gravitate around one axial point – the muse after whom the book is titled Find Me Leonard Cohen, I’m Almost Thirty. That Leonard Cohen, like Ranjan’s poems, would sport caps – fedoras or gavroche – is not a mere coincidence.

Read the complete review The Possibility of Infinite Identities in The Wire. 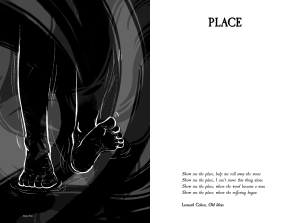 Preeja Aravind in The Free Press Journal
Ranjan, like Cohen, is a writer-poet: A master of literary wordplay. Like Cohen’s poems and songs, there is a deeper meaning and feeling in each of Ranjan’s poems. You will love some, you will scratch your head about some other. And yet, there is indescribable emotion — that you missed something, that there is a story behind the poem, within the poem. Most of Ranjan’s creations evoke this, and still, there is a wry humour that holds some other hidden meaning altogether. Any ’90s child would see that in the backward classification in the Index: Name, Place, Animal, Thing; with a very Cohenesque extra ‘Remembering’.

Read the complete review in The Free Press Journal.